4 Activities to Help Your Child Stand On Their Own

HomeBlogFamily4 Activities to Help Your Child Stand On Their Own 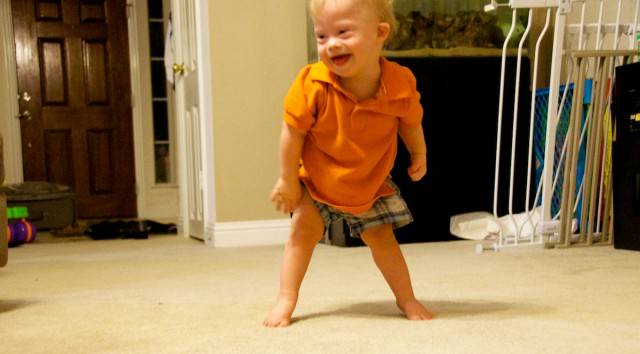 4 Activities to Help Your Child Stand On Their Own

We’re proud to announce that Noah reached another major milestone toady…standing up on his own! Most children actually stand on their own (without help from people or objects, which he has been able to do for a while) before taking their first steps, but not our little guy! In fact, we recently posted a video of him trying to stand on his on, but not quite being able to.  This is probably due to his desire to be moving rather than stand still. Kids are going to achieve their milestones in their own time and in their own order which is fine by me, why follow the “rules.” This is his “trying to stand up” position!

In today’s video you can see Noah going from plantigrade (feet and hands on the floor like a bear walk) to standing. As we have mentioned before, this kid does not like to bend his legs so he is making this harder on himself to try to stand with straight legs. He also doesn’t stay long in standing and tries to sprint to another location.  I have a feeling once Noah starts walking I am going to have to buy a new set of running shoes! He can take a few steps without falling! Here he is standing up on his own!

We have been working on several activities to help our son stand on his own, here’s a few things that have helped him learn to stand up by himself:

1. Pulling to stand using objects or people.  You can see our previous post that talks about some exercises to help prepare for this. This can be from sitting, kneeling, half kneeling, or squatting.

2. Encourage play in the standing position.  Some of our favorite examples of toys for this are the Fisher-Price Laugh and Learn Fun With Friends Musical Table, the B. Zany Zoo, and Fisher-Price Little Super Star Sing-along Stage (which I recommend finding at a second hand store as they are no longer made but are frequently sold for insane prices on Amazon.) You can also put favorite toys on the couch and let your child play in standing that way as well.

3.  Place your child in standing without something in front of them for support, for example with their back against a wall/furniture, or placing them in standing in the middle of the room. I found that I was the best motivator to keep Noah in this position, however you may have to hold toys to keep them entertained. This is how we helped Noah learn to take his first steps.

4.  Get into standing from a sitting position, for example sitting on a box/stool that puts their legs at a 90 degree angle and getting them to stand from there.  This is a task I will admit we never worked on much outside of his therapy sessions but I wish we had.

Today his hard work paid off as he is getting into standing on his own in the middle of a room. This is Noah’s last major motor milestone before becoming an official walker.