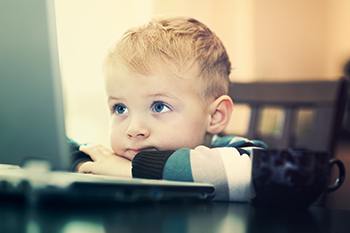 As the use of technology in schools grows rapidly—whether in blended-learning environments, for project-based learning, or just because it’s the fad du jour—how much time students should spend learning on a computer is a point of contention. More and more people seem to agree that digital learning in K–12 classrooms works best when it is used with the oversight of a teacher. The chants of “teachers not technology” and “laptops for layoffs” increasingly appear to be relics of the past. A student can learn effectively via computer if an educator is around to assist and supplement, and teachers are realizing the power computers—properly used—have to enhance their craft.

More often than not, the crowd will get pretty close
to the right answer.

But differences remain. The pessimists worry about students having too much screen time, about technology interfering with relationships between students and teachers, and about potential violations of privacy. Optimists contend that technology can personalize learning for each student; create more-engaging learning environments that free teachers to do what only humans can do well—provide empathy, understanding, and mentorship; and help students learn core knowledge to free up class time for projects  and discussions.

So how should schools navigate these differences? What is the right balance of computer and teacher? How much time should students spend learning independently on a computer? To answer these questions, we did some carefully designed crowdsourcing of the sort for which Yelp and TV game shows have become famous. If you don’t know something, ask the audience. More often than not, the crowd, on average, will get pretty close to the right answer.

Our crowdsourcing was a little more sophisticated than Yelp’s, however. Instead of relying on only those who volunteer their thoughts, we solicited public thinking systematically. As part of the just-released ninth annualEducation Next poll, we asked a representative cross-section  of the American public the following question:

About what share of instructional time in high school do you think students should spend receiving instruction independently through or on a computer?

In order not to point them in any particular direction, we gave our respondents the opportunity to choose among none  at all, 10, 20, 30  … all the way to 100 percent.

Among the general public, 60 percent thought that students should work at least 30 percent of the time on the computer; 62 percent thought that students should not work any more than 30 percent of the time on the computer. Sixty-four percent of parents of children currently in school said the same thing. More than half of the public as a whole said the amount should be somewhere between 20 percent and 40 percent. In other words, the crowdsourced answer is pretty clear: the right way to blend computer time and teacher time is to give the computer about 30 percent, or about one-third, of the school day.

But is crowdsourcing a question like this a good idea? Is the public really that smart? After all, a lot of Americans have been persuaded to support—at least for the time being—some candidates for president who leave a sober citizen totally bewildered.

Counting ourselves among those bewildered citizens, we decided to ask a cross-section of 46 blended-learning experts the same question. There was a risk in doing so, of course, as experts tend to find fault with questions posed to them. In this case, the criticisms centered around what they thought was too passive a way of thinking about digital learning. One respondent replied, “I think the question was structured in a way that it will depress results, e.g., ‘receiving instruction’ made it sound passive and negative. Alternatively, if you had said how much time should students spend in lecture-and-memorize courses, I could say 0 percent.” Still, the experts said that about 40 percent of classroom time should be spent “receiving instruction independently through or on a computer.”

How about the teachers? We are able to report their views as well because the Education Next poll was administered to a representative cross-section of about 700 teachers. The median response was lower than those for parents and the public as a whole. Teachers clocked in at 20 percent, with 58 percent saying it should be no more than that percentage.

The bottom line for us is the narrow range within which options are being considered. It is hard to compromise if one side says that there shall be no computer instruction, while the other side wants all instruction via computer. But when differences are only 10 to 20 percentage points, they usually can be bridged.

And, of course, we must issue our own caveat. The right amount of time is going to vary with the individual student.