The veins in your brain don’t all act the same

HomeBlogPsychologyThe veins in your brain don’t all act the same 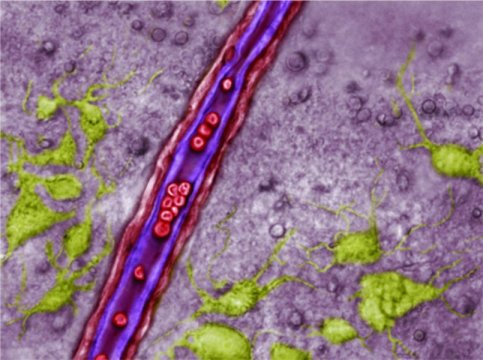 The veins in your brain don’t all act the same

Certain blood vessels in the brainstem constrict when blood vessels elsewhere in the body would dilate. And that contrary behavior is what keeps us breathing, according to a new paper by UConn researchers published May 8 in eLife.

If the body were a marching band, the brainstem would be the drum major. It keeps our heart beating and our lungs breathing in the essential rhythms of life. And just like a drum major, the job is more complex than it looks. If cellular waste products build up in the body, the brainstem has to jolt the lungs into action without disrupting other bodily functions, as surely as a drum major reins in a wayward woodwind section without losing the low brass.

Neuroscientists studying the brainstem have focused on neurons, which are brain cells that send signals to one another and all over the body. But focusing just on the neurons in the brainstem is like staring only at the drum major’s hands. Recently, neuroscientists have come to understand that astrocytes, cells once thought to simply provide structure to the brain, also release signaling molecules that regulate neurons’ function. But until now, no one even considered the possibility that blood vessels may be similarly specialized.

For more than a century, doctors and scientists have known that blood vessels dilate when cellular waste products like carbon dioxide build up. Widening the vessels allows fresh blood to flush through, carrying in oxygen and washing away the acidic carbon dioxide. This has been shown to be true throughout the body, and is standard dogma in undergraduate physiology classes.

UConn physiologist Dan Mulkey was teaching exactly that to undergraduates one day when he realized that it couldn’t possibly be true in a certain part of the brainstem.

“I thought, wow. If that happened in the region of the brain I study, it would be counterproductive,” Mulkey says. He studies the retrotrapezoid nucleus (RTN), a small region in the brainstem that controls breathing. He’s shown in the past that RTN neurons respond to rising levels of carbon dioxide in the bloodstream by stimulating the lungs to breathe. But if the blood vessels in the RTN dilated in response to rising carbon dioxide the same way blood vessels do everywhere else, it would wash out that all-important signal, preventing cells in the RTN from doing their job driving us to breathe. It would be as if the drum major didn’t notice the percussion section wandering off to left field.

When Mulkey returned to the lab, he asked his team, including NIH postdoctoral fellow Virginia Hawkins, to see how blood vessels in thin slices of brainstem respond to carbon dioxide. And they saw it was indeed true — RTN blood vessels constricted when carbon dioxide levels rose. But blood vessels from slices of cortex (the wrinkled top part of the brain) dilated in response to high carbon dioxide, just like the rest of the body.

But how did the blood vessels know to act differently in the RTN? Mulkey guessed that RTN astrocytes had something to do with it. He suspected that the astrocytes were releasing adenosine triphosphate (ATP), a small molecule cells can use to signal one another. And that was causing the RTN blood vessels to constrict.

When they tested it, they found the hypothesis was correct. The astrocytes in the RTN were behaving differently than astrocytes anywhere else in the body. When these brainstem astrocytes detected high levels of carbon dioxide, they released ATP signaling to the neurons and blood vessels.

The majority of this research was done by UConn undergraduates, including Ashley Trinh, Colin Cleary, and Todd Dubreuil, as well as Elliot Rodriguez, a summer student in the National Science Foundation (NSF) Research Experience for Undergraduates in Physiology and Neurobiology program at UConn, who studies at Gettysburg College in Pennsylvania the rest of the year. The students’ work uncovered a major discovery in neurophysiology. The work was funded in part by grants from the National Institutes of Health (HL104101 HL126381) and the Connecticut Department of Public Health (150263).

“This is a big change in how we think about breathing,” Mulkey says. And about blood vessels. Even in a single organ like the brain, the purpose of blood flow is not the same everywhere. Tailored responses in the RTN keep the body’s drum major conducting, and let the band play on.

Materials provided by University of Connecticut. Note: Content may be edited for style and length.